Due to the Covid-19 Outbreak we are working curbside only, please call us when you arrive. For the safety of our staff, please wear a mask and notify us if you have had any exposure to the virus. Thank you 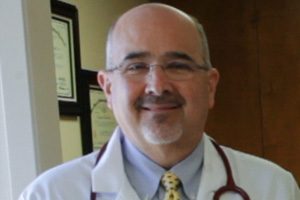 Dr. Miller was raised right here in Houston. He graduated from Texas A&M University with a Bachelors's degree in Animal Science in 1981. He then worked several jobs (including delivering dog food) before returning to Texas A&M University where he received his Doctor of Veterinary Medicine in 1991. He worked in South Texas before returning home to join Dr. Davis at Village Veterinary Clinic in 1994.

Dr. Miller and his wife, Jane, are hoping to start enjoying their new quiet life together now that their two children are grown and out of the house. Dr. Davis was raised in Marked Tree, Arkansas. He graduated from the University of Arkansas in 1958. He received his Doctor of Veterinary Medicine from Oklahoma State University in 1965. He and his wife, Mary Catherine, moved to Houston in 1965 where he started working at Village Veterinary Clinic as an associate veterinarian. He soon became an owner of the clinic he loved.

Although Dr. Davis is no longer with us, he will be in our hearts and part of the Village Veterinary Clinic forever. Dr. Walsh was raised in Houston. She always wanted to be a veterinarian and practiced on her pecking duck named Pietri. She received her Bachelors from Rice University in 2008 and her Doctor of Veterinary Medicine from Texas A&M in 2013. She joined the Village Veterinary Clinic shortly thereafter. She is interested in small and exotic medicine, soft tissue surgery, dermatology, behavior, and sports medicine.

Rachel and her husband, Ryan have three beautiful children and live with Sammy, their Nova Scotia Duck Tolling Retriever. Dr. Leland grew up in Keller, TX (a suburb of Ft. Worth). She discovered veterinary medicine at a school fair when she was 6 years old and wanted to be a veterinarian ever since. She graduated from Texas A&M University with a Bachelors's degree in Animal Science in 2011. She received her Doctor of Veterinary Medicine from Oklahoma State University in 2015. She came to join Village Veterinary Clinic after graduation and soon became a client favorite. Her goal is to continue growing as a veterinarian and learn to balance her family life and professional life.

Katie and her husband, Hunter, have a beautiful daughter who has two guardian dogs, Penny and Miller, to protect her. 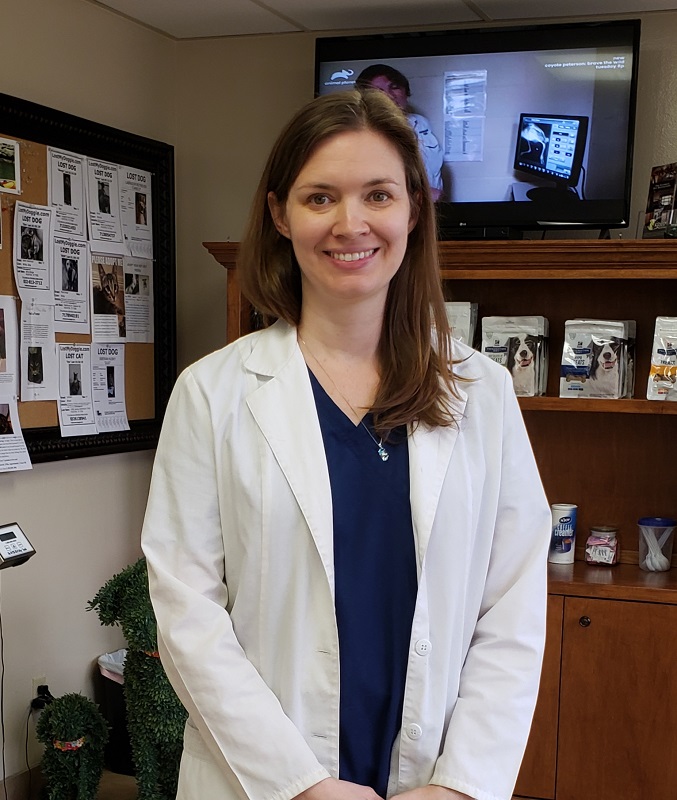 Susanne was raised in Abilene, TX. She followed the family tradition by attending Texas A&M University. Getting a degree in Wildlife Biology did not open the doors she thought it would. She worked in retail for many years before finally finding her place in the veterinary field in 1990. She joined the Village Veterinary Clinic family in 2000 and said she instantly felt she was "home". She loves her VVC family, both coworkers, and clients. Christina was raised in Sugar Land, She claims she wanted to work with animals since birth. She joined the Village Veterinary Clinic family in 2013 after graduating from Texas A&M with a double major in Biomedical Science and Bio-environmental Science. She quickly found she loved both the clinic and it's clients. There is no question that the feeling is mutual.
Christina and her husband, Daniel, live with their dogs, Izzy and Axel... and a sweet cat nicknamed Lucifer. Kate was born and raised right here in Houston. As a small kid, she was obsessed with everything to do with animals and the army. She graduated from Texas A&M University-Corpus Christi in 2004, with a major in Criminal Justice and a Minor in Social Work. Katie then moved back to Houston to start a short-lived career with the Houston Police Department. While attending HPD’s academy in 2005, she started dating and became engaged to her current husband, Ben. That changed a few life perspectives and priorities. Katie ultimately decided to resign from the HPD, shortly after graduating from their academy. A few months later, she began her career with us here at Village Veterinary Clinic. She has become a “Jack of All Trades” by working as a technician, receptionist, administrative assistant, and manager. Her title changes day-to-day, depending on the need. She and Ben live in Katy with their two daughters, Lucy and Cora, their dog Turk and loveable cat, Summer. JoAnn grew up in a large family here in Houston and graduated from Memorial High School. She has wanted to work with animals since she was a teenager. She has been working in veterinary medicine for over 15 years. She loves helping pets because they love us unconditionally.
Her ultimate goal is to go to Bible college and work in children's ministry or a recovery home.
JoAnn and her husband, Carlos, live with her son Nicholas and their 2 rescued Shih Tzus, Faze and Gizmo.

Kelly joined our family in 2016. With her big smile and cheerful demeanor, she was a terrific addition to our front desk. She was raised in Richmond, TX where she dreamed of working with animals as she cared for her MANY pets.

Kelly and her husband, Tyler, live in Richmond with their large menagerie of pets, including a dog named Tyler. (She claims she had Tyler the dog PRIOR to meeting Tyler the husband!) 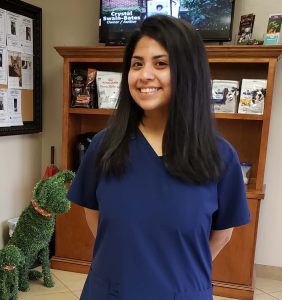 Miriam was raised in Houston and earned her Associate Degree at Lone Star College. She has loved animals since she was an itty bitty child. Miriam was an instant hit with our clients. She has a knack of making clients feel comfortable. Her goal is to travel around the world, beginning with Japan. Miriam lives with her family and Kuki, her schnauzer mix. 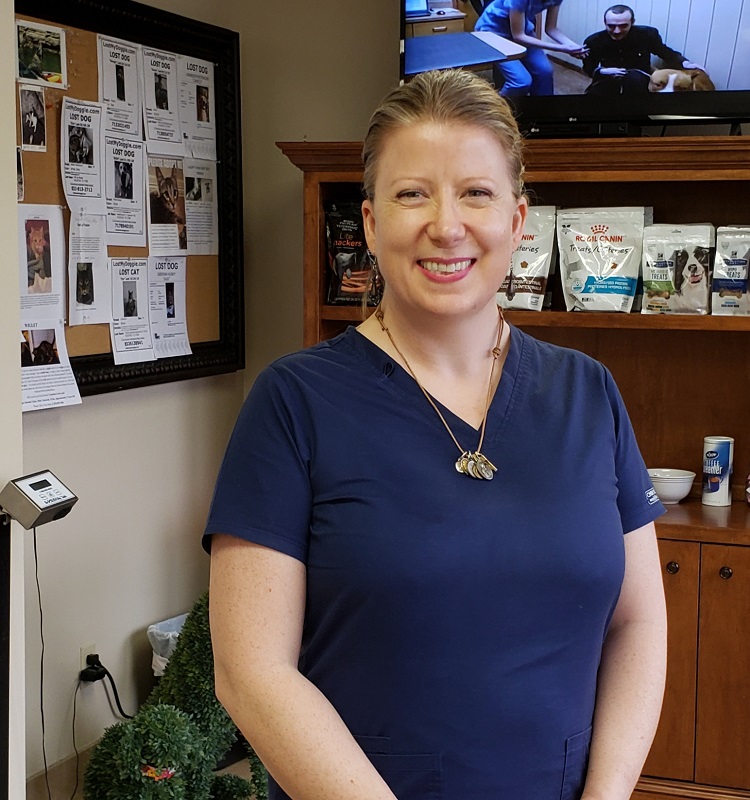 Alison came to the VVC after years of working at the Dog Ranch. Clients were thrilled when they learned she had joined our family! You can’t help but smile when you hear her cheerful voice. Alison works so she can treat her 3 dogs, Apricot, Kenley, and Mo, like the royalty they believe they are. 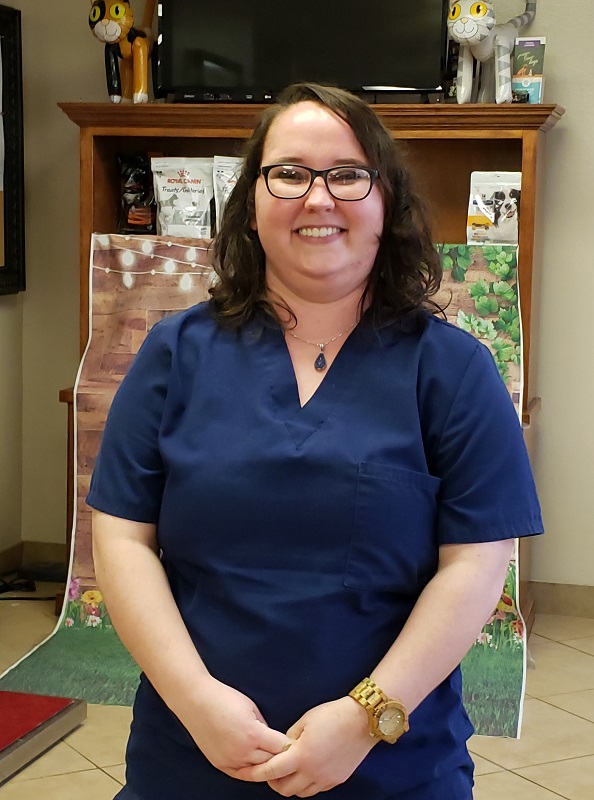 Janie came to Houston from Ohio, where she was raised and attended school. She received her B.S. in Biology from Wright State University. She decided she had enough of those Ohio winters and headed South. We are sure glad she did. She worked as a Veterinary Technician elsewhere before finding herself lured to the VVC. We are excited to have her cheerful smile join our team. Janie has 5 cats at home to keep her busy. 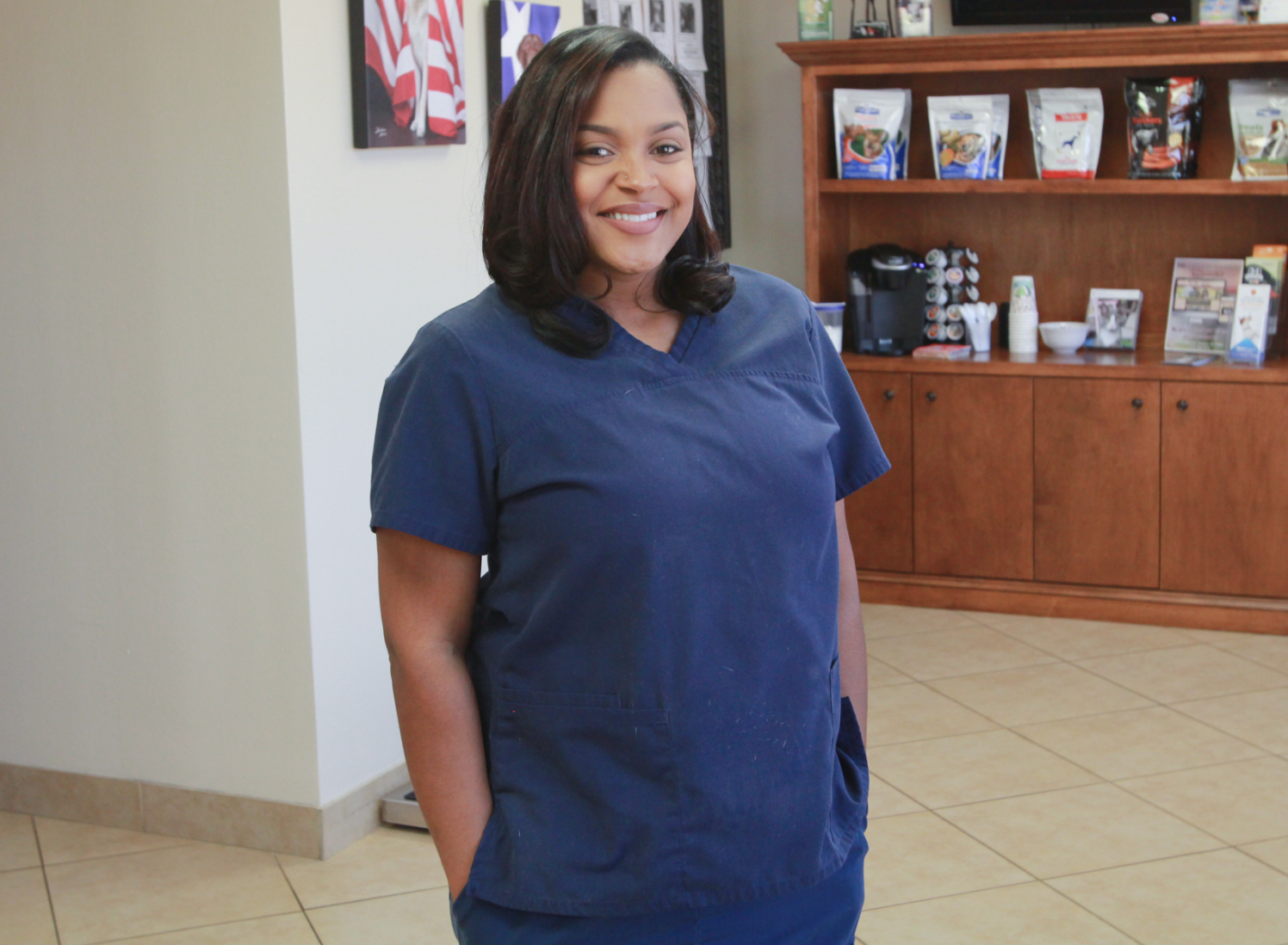 Evonne joined Village Veterinary Clinic in 2015. She worked in emergency medicine for several years before joining our family. Not only is she an excellent technician, she is often our entertainment. Her Louisiana humor always makes us laugh. Although exhausted most of the time, this new mother gives her all to our clients and their pets.
Evonne lives with her husband, Melvin and their son, “Q” and her two dogs, Nala and Cane. Mau joined the VVC with several years of technical experience. He keeps us entertained with his off-beat sense of humor! He adopted a kitten shortly after joining our family (a common occurrence). Mau is a new father and is adjusting to the new role, including lack of sleep. Mau and his beautiful but exhausted wife live with their new baby boy and Mando the cat. 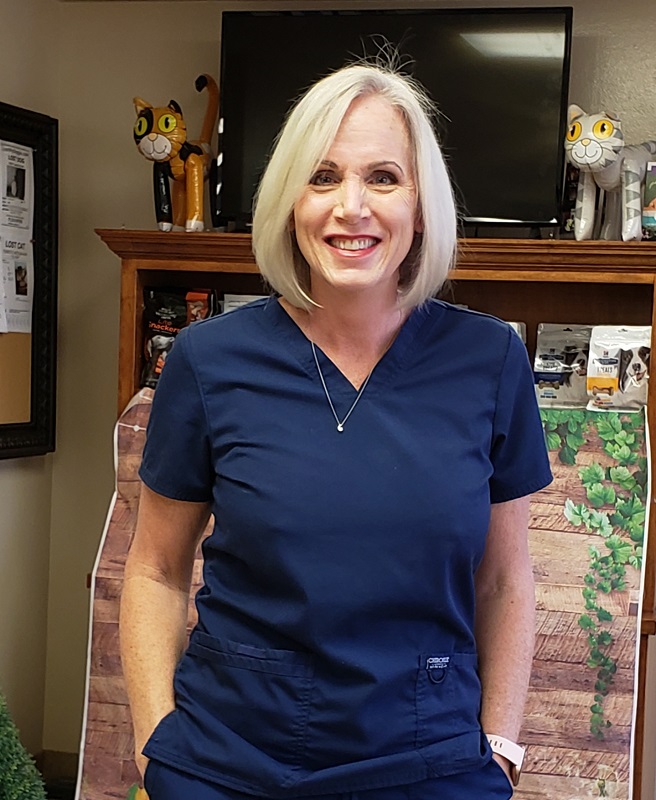 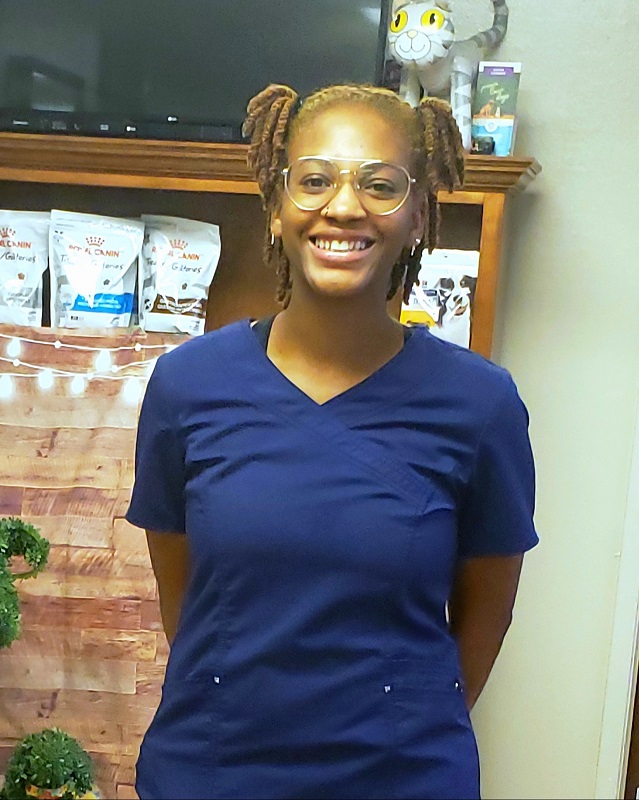 Britni was raised in Houston and always loved animals. Once she decided she wanted to work with them as a career, she entered Vet Tech Institute. She did her externship with us in the summer of 2020. Her positive attitude and desire to do whatever is needed for our patients made her a good fit with our VVC family so we asked her to stay on after she graduated. Luckily, she agreed. Britni lives with her Mom and her sweet dog, Jackson. 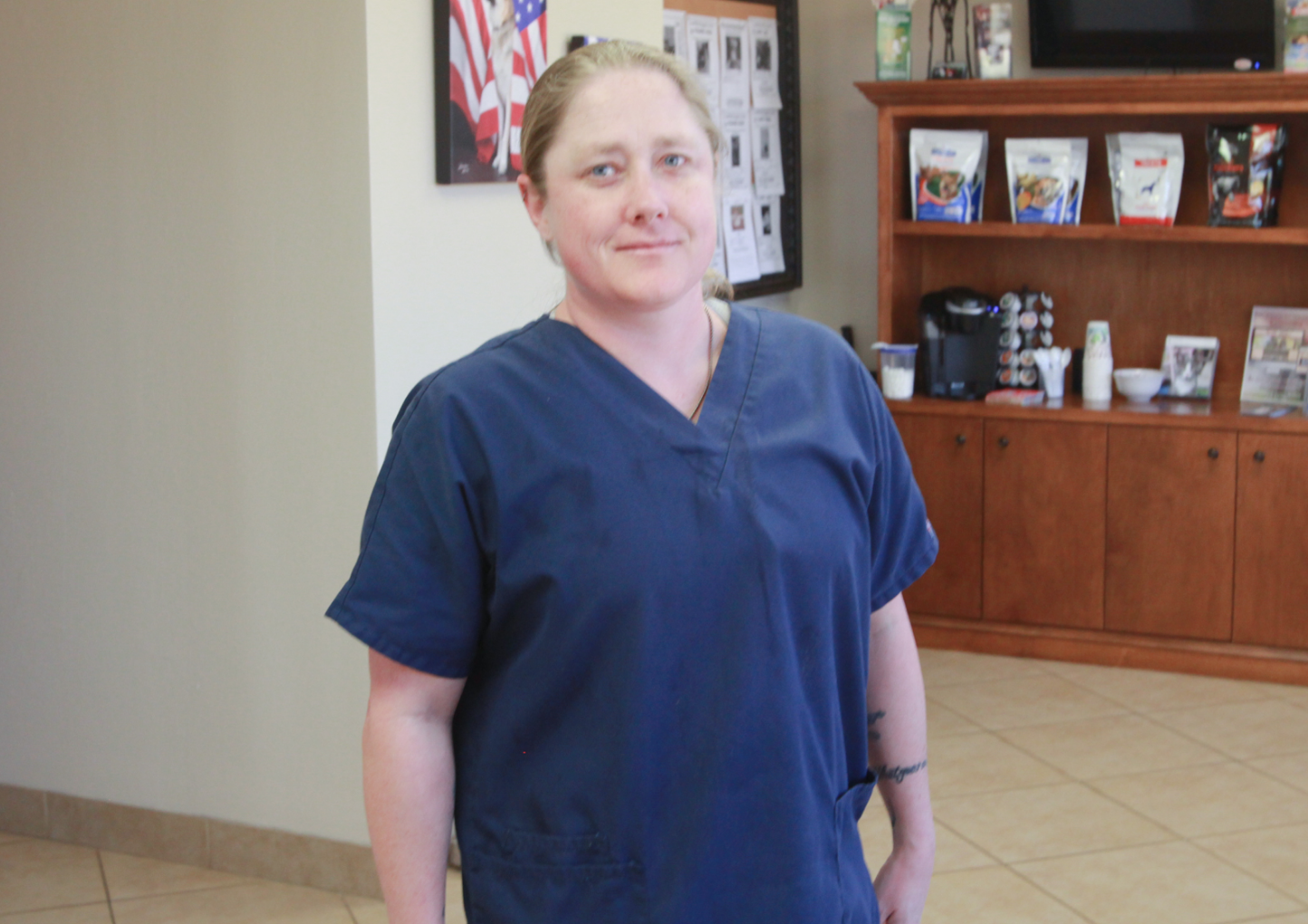 Jennifer joined the Village Veterinary Clinic family in 2015 and immediately fit right in. Jennifer grew up in the Sugar Land area. She has wanted to work with animals for as long as she can remember. She is always ready to lend a hand where needed.

Jennifer and her wife, Blythe, live with their 5 cats and 2 dogs in Katy. Her goal is to retire anywhere near the water. 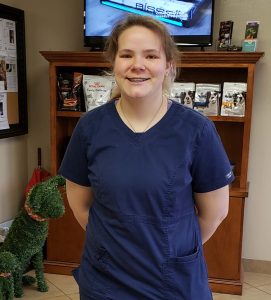 Paige joined the VVC family shortly after graduating from Katy High School. She has always loved animals and wanted to work with them. Her goal is to continue to learn and become a strong veterinary technician. We have no doubt that she can do it! Paige still lives in Katy with her family and her 2 dogs, Izzy and Tipsy. 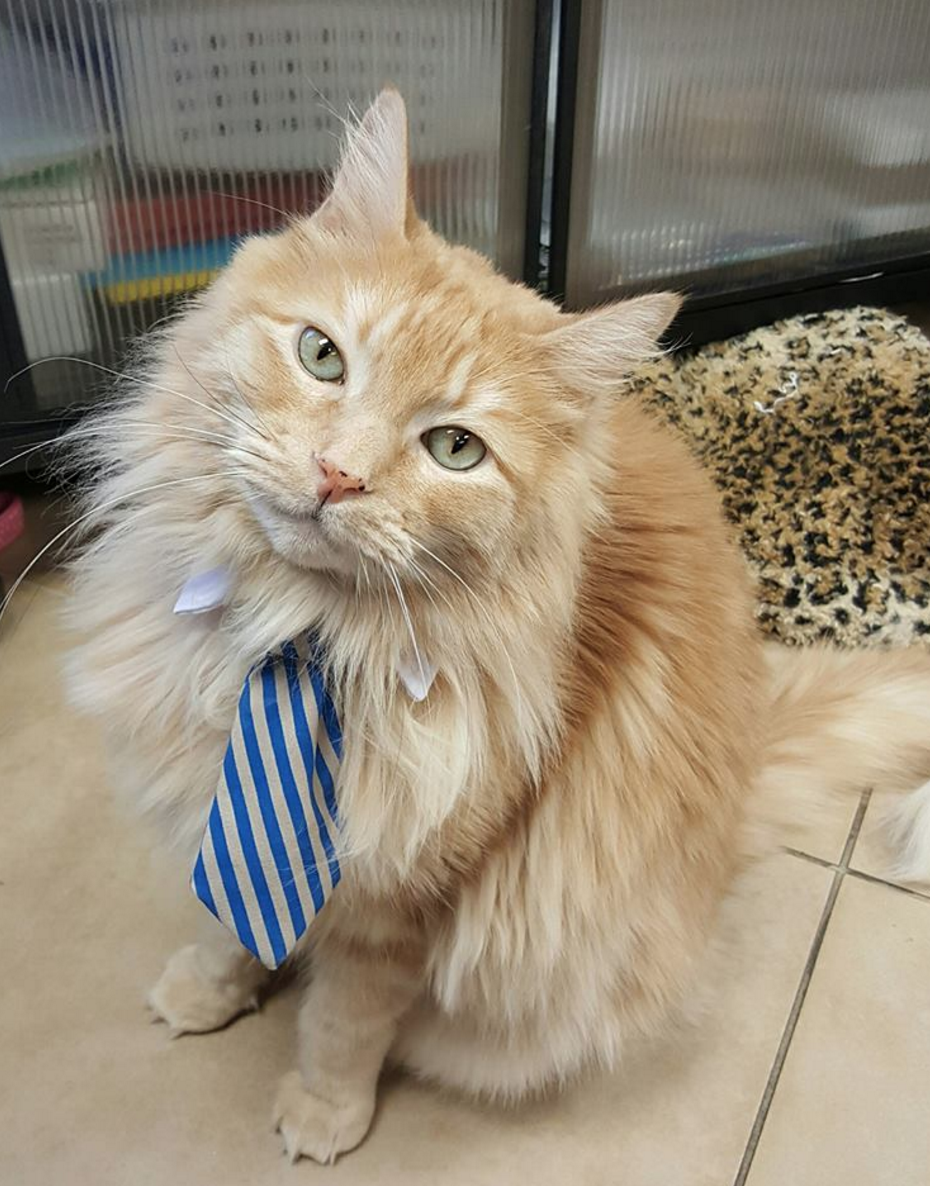 Anyone who meets Max will first notice how gorgeous he is. Unfortunately, he knows it! This is Max’s kingdom and we are only here to serve him.
Font Resize
Contrast
Accessibility by WAH